The Red Shoes in the Halliburton Case ...

In the late 80's early 90's the great didjeridoo virtuoso Stephen Kent came by my then radio show West Coast Weekend in a band called Lights in a Fat City with Kenneth Newby, Beth Custer, and John Loose — or maybe by then they were Trance Mission — and rocked and didged into our hearts.

Stephen, out of British rock ’n’ roll tradition,  wore a pair of red Doc Marten’s.  I thought they were the snazziest things I seen on a man’s foot since some elegant Italian pumps at a cocktail party in London.

Soon after, while shopping at Nordstrom in San Francisco for a pair of good shoes to wear standing on stage, I found a pair of black Doc Marten’s.  Gleaming next to the hip black shoes perched a red pair on the shelf.  One size.  My size.  So, of course, I bought both pair.

Theater audience reaction was mixed.  Cool to oooh to uggh.  But I enjoyed wearing them.  Gave a me a lift, became a thing.  When Larry Gay joined the crew, he found two swell pair - he’s now on his second set — of red shoes with Chinese dragons on them. 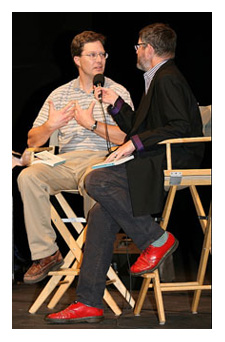 Occasionally, a guest remembering the red shoes will come in the next time so shod as well.  T.C. Boyle then one-upped himself his following visit by adding a raspberry-tinted suit. One of a kind he says from Hugo Boss.  My garb comes from a small shop in Norfolk, England, re-creating 19th century British cuts.  If there’s any interest in such sartorial detail, I’ll write about the shop soon.

I wear the shoes at each show, even on the road.  Sometimes I wear them to the show, other times I put them on just before the program airs, with Mike Greensill playing an homage to Mister Roger’s Neighborhood. It is not true I carry them in a Halliburton case.

In the Gold Pan Theater in Skagway, Alaska, during our tour there ten years ago, while interviewing a man about the excesses of the Alaska gold rush of 1898-99 that pulled the U.S. out of a depression, I asked if anyone returned to the United States with some fortune intact.

So much was spent getting women and champagne to Dawson City in the Yukon - a role model for the Dot Com boom - that most hard- dug gold frittered away in breezy good times.  "Well," said the guest, "there were a few - one fellow took his stake back to Seattle where he opened a shoe store.  His name was John Nordstrom."  There, back at the gateway to the Yukon, I learned the connection between the Yukon and Nordstrom and my red Doc Marten’s, now with the dust of the Far North in the shoe’s creases.

For going on 25 years these shoes make me smile, like a comfortable harness, the foot garb that keeps me grounded, and sets the tone for my whole posture.

Recently, someone called my attention to a documentary called, The Man in the Red Shoes, which turns out to be about my colleague Garrison Keillor.  Imagine my surprise he’d shifted footwear!  So important in radio.  For years, I’d learned, he’d worn red socks, usually with a white suit and white or dark shoes. He was last on West Coast Live in September 2001.  He wasn’t wearing red shoes, then.  But he did see mine!

The red socks phenomenon is interesting.  No doubt you know someone who sports them.  My long-ago friend, the late, great Calvin Simmons, wore red socks when conducting Shostakovich’s Lady Macbeth of Mtsensk at the San Francisco Opera in the 1981.  M.F.K. Fisher, the night I interviewed her at the Herbst Theater in San Francisco, chose to wear reddish-orange hose she picked up at a Walgreen’s pharmacy on the way into town.  She called them her "whore-hose"!  And Mike Greensill wears red socks to this day when he plays on West Coast Live.

It's what we listen to on Saturday mornings in San Francisco